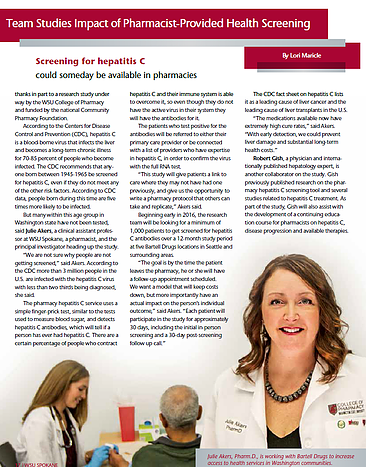 Screening for hepatitis C could someday be available in pharmacies thanks in part to a research study under way by the WSU College of Pharmacy and funded by the national Community Pharmacy Foundation.

According to the Centers for Disease Control and Prevention (CDC), hepatitis C is a blood-borne virus that infects the liver and becomes a long-term chronic illness for 70-85 percent of people who become infected. The CDC recommends that anyone born between 1945-1965 be screened for hepatitis C, even if they do not meet any of the other risk factors. According to CDC data, people born during this time are five times more likely to be infected.

But many within this age group in Washington state have not been tested, said Julie Akers, a clinical assistant professor at WSU Spokane, a pharmacist, and the principal investigator heading up the study.

“We are not sure why people are not getting screened,” said Akers. According to the CDC more than 3 million people in the U.S. are infected with the hepatitis C virus with less than two thirds being diagnosed, she said.

The pharmacy hepatitis C service uses a simple finger-prick test, similar to the tests used to measure blood sugar, and detects hepatitis C antibodies, which will tell if a person has ever had hepatitis C. There are a certain percentage of people who contract hepatitis C and their immune system is able to overcome it, so even though they do not have the active virus in their system they will have the antibodies for it.

The patients who test positive for the antibodies will be referred to either their primary care provider or be connected with a list of providers who have expertise in hepatitis C, in order to confirm the virus with the full RNA test.

“This study will give patients a link to care where they may not have had one previously, and give us the opportunity to write a pharmacy protocol that others can take and replicate,” Akers said.

Beginning early in 2016, the research team will be looking for a minimum of 1,000 patients to get screened for hepatitis C antibodies over a 12-month study period at five Bartell Drugs locations in Seattle and surrounding areas.

“The goal is by the time the patient leaves the pharmacy, he or she will have a follow-up appointment scheduled. We want a model that will keep costs down, but more importantly have an actual impact on the person’s individual outcome,” said Akers. “Each patient will participate in the study for approximately 30 days, including the initial in-person screening and a 30-day post-screening follow up call.”

Robert Gish, a physician and internationally published hepatology expert, is another collaborator on the study. Gish previously published research on the pharmacy hepatitis C screening tool and several studies related to hepatitis C treatment. As part of the study, Gish will also assist with the development of a continuing education course for pharmacists on hepatitis C, disease progression and available therapies.